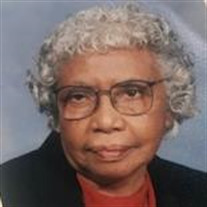 The family of Lillian Irene Holman Long, age 97, announces her passing which occurred on Thursday, January 9, 2020, at her home. Lillian Irene Long was born August 8, 1922 to the late Will Holman and Janie Parker Holman in Durham, North Carolina. She graduated from Little River School and later became a teacher's aide at the same school, for many years. Irene was married to the late Henry Edward Long, who preceded her in death on March 31, 1994. To this union, five children were born. Of these five children, two preceded her in death: Rose Long Hamlett and Jimmie Long. At an early age, Irene joined Mt. Calvary Missionary Baptist Church, where she was a dedicated member. She served faithfully as a Sunday School teacher, member of the Missionary Circle, Senior Choir and Pastor's Aide. Irene also attended the Little River Senior Citizens center for many years where she helped organize a Bible class and was an active quilter and walker. Irene always put others needs before hers and was an inspiration to all who knew her. Her famous saying was, "Pray hard and give God the glory!" Irene's beautiful memory will forever be cherished in the lives of her children: Charles Long, Sr., Bradley Long and Jennifer Long; five grandchildren, Tonya Hamlett, Michelle Hamlett, Briana Evans (Eugene), Charles Long, Jr. and Kia Hart; one great grandchild, Mikail Evans; and a host of nieces, nephews, and brothers and sisters in Christ. A Service of Celebration has been scheduled for Tuesday, January 14, 2020, at Mt. Calvary Baptist Church, 8021 Stagville Road, Bahama, North Carolina 27503. The family will assemble for a visitation from 12:00 noon to 1:00 p.m., followed by the celebration service, at 1:00 respectively. Mrs. Lillian Irene Holman Long will be laid to rest in Mt. Calvary Baptist Church Cemetery.

The family of Lillian Irene Holman Long, age 97, announces her passing which occurred on Thursday, January 9, 2020, at her home. Lillian Irene Long was born August 8, 1922 to the late Will Holman and Janie Parker Holman in Durham, North Carolina.... View Obituary & Service Information

The family of Mrs. Lillian Irene Long created this Life Tributes page to make it easy to share your memories.

The family of Lillian Irene Holman Long, age 97, announces her...

Send flowers to the Long family.