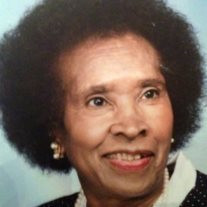 Mrs. Lillian Parker Turrentine departed her earthly life on March 28, 2014. She was born in Rougemont, the first daughter of the late Mr. Robert Lee Parker and Mrs. Pandonia Pride Parker. In addition to her parents, she was preceded in death by one sister, Mrs. Myrl Parker Harris; two brothers, Mr. Hollis Parker, Mr. David C. (DC) Parker; and her husband, Mr. Larry F. (Buster) Turrentine, Sr. At an early age, Lillian joined New Red Mountain Missionary Baptist Church, where she accepted Jesus Christ as her Lord and Savior. As a lifelong member, she has lived her life as a faithful servant always with a kind word. On November 23, 1943, she was united in holy matrimony to Larry F. (Buster) Turrentine, Sr. To this union one child was born, Larry F. Turrentine, Jr. She was truly a devoted wife and mother. She graduated from Rougement High School. Lillian completed additional studies in Business, Secretarial and Nursing. She had longtime careers with North Carolina Mutual Insurance Company as an Administrative Assistant and Burlington Industries as Company Nurse. Mrs. Turrentine was a Nurse at Lincoln, Watts, and Duke hospitals. She also was a Nurse with Memorial Hospital in Chapel Hill. Her nursing career continued as a Private Duty Nurse for the terminally ill. As a kind and dedicated person and wanting to be around people, even after retirement she participated in a special program that focused on placing interested senior citizens back in the work force. She chose to work with a security agency at RDU. This program was so effective that ABC’s Good Morning America highlighted it, and Lillian was the senior featured. Her hobbies included sewing and traveling. Those she leaves to celebrate her life include her son, Larry F. Turrentine, Jr., daughter-in-law, Venice Ursula Thomas Turrentine, and granddaughter, Felicia LaVerne Turrentine, all of Greensboro; two special nephews and nieces, Sonny Lee Harris & Martha Harris, Michael Turrentine, Marsha Harris; and a host of cousins, nieces, nephews, in-laws, family and friends. Services will be held on Monday March 31, 2014 at New Red Mountain Missionary Baptist Church. Viewing will begin at 12:30pm and services will begin at 1:00 pm. Arrangements are by Scarborough & Hargett Funeral Home of Durham, NC.

Mrs. Lillian Parker Turrentine departed her earthly life on March 28, 2014. She was born in Rougemont, the first daughter of the late Mr. Robert Lee Parker and Mrs. Pandonia Pride Parker. In addition to her parents, she was preceded in death... View Obituary & Service Information

The family of Mrs. Lillian Parker Turrentine created this Life Tributes page to make it easy to share your memories.

Send flowers to the Turrentine family.