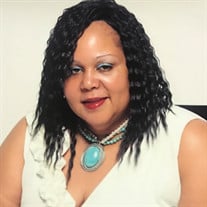 Condolences are being expressed to the family of Mrs. Linda Rogers, age 53, who passed away on Thursday, February 7, 2019, at Rex Hospital, Raleigh, N.C. and gained her angel wings. Linda Denise Rogers, fondly known as "Bird", was born on May 28, 1965 in Newark, New Jersey to the late Ernest Sr. and Ozola Rogers. She was the sixth child born of the union and was the youngest daughter. Linda was the very essence of kindness, compassion, beauty, and generosity, and she always freely extended herself to others. Linda was a graduate of East Side High School in 1984 and attended Essex County College where she earned several certifications. Her career path began with her well-known love for children. Linda was a remarkable and nurturing childcare provider. Her journey led her to relocate to Raleigh, North Carolina in 1995 to assist with establishing the family-owned Burger King franchise. Linda's superior managerial skills as the General Manager for over 25 years led her to be known as the HEART of the franchise. Along her career pathway, Linda's drive and tenacity led her to accomplish her CNA license. Linda's life motto was "Living My Best Life" and she in fact did just that. One never had to guess where they stood with Linda. She always had an open door policy and an available seat at her table. Never allowing the grass to grow under her feet, she was always on the go. Linda was not only known as the Life of the Party, she was often the creator of the party. Linda was an inspiration to the many people that she encountered during her life, but to her family she was the core, the rock, and the glue that held them together. Once again Linda is bringing family and friends together, this time for the celebration of a life well lived by her. Linda was preceded in death by her parents, Ernest Sr. and Ozola Rogers, and older brother, Ricky Rogers. She leaves to cherish her memories: her one loving son, Lynell Rogers; three sisters, Brenda (Percy) Rogers of Union, NJ, Patricia (Herman) Rogers of Raleigh, NC and Pamela Moore of Southfield, MI; two brothers, Ernest Rogers, Jr. of Irvington, NJ and Tony Rogers of Newark, NJ; and a host of nieces, nephews, relatives and friends. A homegoing celebration will take place on Wednesday, February 13, 2019, at Scarborough & Hargett Celebration of Life Center, Inc., 309 N Queen Street, Durham, N.C. 27701, at 6:00 p.m.

Condolences are being expressed to the family of Mrs. Linda Rogers, age 53, who passed away on Thursday, February 7, 2019, at Rex Hospital, Raleigh, N.C. and gained her angel wings. Linda Denise Rogers, fondly known as "Bird", was born on May... View Obituary & Service Information

The family of Mrs. Linda Rogers created this Life Tributes page to make it easy to share your memories.

Condolences are being expressed to the family of Mrs. Linda Rogers,...

Send flowers to the Rogers family.