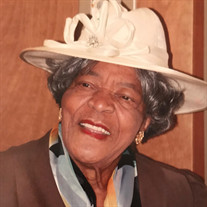 Mrs. Marjorie Naomi Norris Knight, age 92, departed this life on Monday, December 31, 2018. She was born Thursday, August 5, 1926 at 5:15 a.m. This bouncing baby girl was born to Mr. James Anderson Norris, better known as "Ham Bone" and Mrs. Erica Alverta Stanfield Norris. The attending physician was Dr. Charles Shepard, who was the brother of Dr. James Shepard, founder of the North Carolina College for Negros, better known as North Carolina Central University. Marjorie was born and raised in Durham, North Carolina. She attended school at Hickstown Elementary School. She attended high school at Hillside Park High School, now known as Hillside High. Her college studies began at Winston Salem Teacher College, known as Winston Salem State University, where she attended for three years; then spent her fourth year at Elizabeth City State a University, where she received and graduated with a B.S. degree in Education. She had a great desire to continue her education, and she attended New York University (NYU) where she received and graduated with a master's degree in Educatiin. After graduating from college, Marjorie was blessed to receive a position teaching 3rd/4th grade at Efland Colored School, which later was renamed, Efland Grade School, in Efland, N.C. She taught there for eight years, (1947-1955), where she influenced many students' lives. After leaving Efland, she received a teaching position at Jefferson Elementary School in Plainfield, N.J. teaching 3rd-5th grades. She taught there for the next 21 years, until she retired. Upon retiring, she enjoyed her numerous hobbies which included: traveling, arts and crafts, making hats and jewelry, crossword puzzles, reading, music, singing, dancing, and chatting on the phone for hours. On July 18, 1959, Marjorie N. Norris married James C. Knight, Sr. Through this union, they bore one child, James C. Knight, Jr. They remained married for 27 years. At the age of 12, Marjorie gave her life to Christ, at West Durham Baptist Church under the leadership of Dr. Thomas C. Graham. West Durham Baptist Church always held a special place in her life because it was the church that was founded and organized by her grandfather, Rev. Henry Washington Stanfield. She remained at West Durham Baptist Church until she moved to Plainfield, New Jersey. While in New Jersey, she attended Calvary Baptist Church, where the late Charles P. Harris, Sr. was the pastor. She then moved to South Jersey, where she attended Union Temple Baptist Church in Atlantic City, N.J. under the leadership of the late Rev. Dr. Matthew E. Neil. Upon returning to Durham, N.C. in 1996, she began worshipping at Greater Saint Paul Missionary Baptist Church under the leadership of Pastor William-Hazel Height, where her membership remained until her transition. Throughout her Christian walk in her beloved churches, she volunteered her time and talents in the following capacities: sang in the choir, assisted with Sunday School, assisted with Vacation Bible School, decorated the church bulletin board, a member of the decorating committees, and directed and presented several plays. Marjorie N. Norris Knight leaves to cherish her loving memories: one son, James Clifton Knight, Jr. (Priscilla); two grandchildren, Jasmine Kiarrah Luckey (David) and James Clifton Knight, III; her beloved church family; and a host of other relatives and friends. Funeral services will take place on Saturday, January 12, 2019, at Greater St. Paul Missionary Baptist Church, 1102 Juniper Street, Durham, North Carolina, 27701 at 12:00 noon, with a family visitation one hour prior to the service.

The family of Mrs. Marjorie Naomi Norris Knight created this Life Tributes page to make it easy to share your memories.

Send flowers to the Knight family.