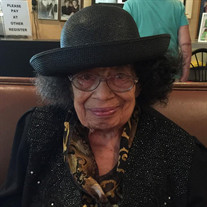 Mrs. Martha Lillian Grady Dalton, age 97, departed this life on Monday, February 5, 2018. Martha was born to the Rev. Thomas Alvis Grady and Dovie Bass Grady on November 9, 1920. She was the oldest of five children. Three of her siblings preceded Martha in death, Alvis Grady, Gladys Knox and Mildred Betts. Martha was married to George Franklin Dalton of Statesville for 53 years, until the time of his death. They were both proud to have celebrated their 50th Anniversary in a Rededication Service, followed by a trip to the Holy Land in 1993. Of that union, two daughters were born, Martha Francine Dalton and Coral Lynn Dalton, who died in 2007. Martha was educated in the Durham County School System, graduating from Hillside High School, which was then located in the old Whitted building by Hillside Park. Martha attended North Carolina College, and pledged Alpha Chi Chapter of Alpha Kappa Alpha Sorority, Inc., in 1939. She was a member of the second group to be initiated into Alpha Chi Chapter. She later became a Golden Eagle, celebrating fifty years as a graduate of her esteemed institution. She was a Diamond member (75 years) of the sorority. She continued her education when she received her graduate degree from Columbia University in NYC in 1949, with a Masters in Home Economics. After the birth of her daughter Francine, Martha worked in Shelby, N.C. as a home economics instructor. She then held various positions in Statesville, N.C., including bookkeeper at the historically Black Credit Union in Iredell County, and as an assistant at the health department until she enrolled at UNC Chapel Hill in 1965. There, she became certified in elementary education and library science. She taught briefly at Fayetteville Street Elementary School in Durham, N.C., and later served as a media specialist in the Iredell County Schools. Martha was always very committed to community service and volunteerism. She volunteered as a Girl Scout Leader, Director of The Baptist Training Union in Statesville and while at Mt. Zion Christian Church in Durham, she was a deaconess and very involved with the outreach ministries. She also was active in the Durham Flower Club, coordinator for the Crop Walk, one of the leaders of the Tuesday Bible Study (acting as a local taxi driver for many of its members) and census taker. In later years, after she stopped driving, she sent birthday and sympathy cards to church members, family and friends. Many of her special family and friends received phone calls on the first of each month, wishing them a "Happy Beginning of the Month." As a follower of Jesus Christ, Martha's life was quite active in the church. As she shared with many, she was baptized by her father, the Rev. T.A. Grady at age sixteen. She attended First Baptist Church in Statesville, N.C. Upon her return to Durham in the 80's to care for her mother, she joined Mt. Zion Baptist Church (later Mt. Zion Christian Church) and later returned to Ebenezer Missionary Baptist Church, the place of her baptism by her father. Mrs. Dalton was active until her death. Surviving relatives include her daughter, Francine Dalton Davis; sister, Hazel Grady Weeks, Mildred G. Betts; grandchildren, Kenya Francine Davis and Melba Umoja Davis; nieces, Lauren Green, Jennifer and Jacqueline Betts, Renee Mitchell and Sonja Neely; nephews, Alvis and Daniel Grady, William, John and Derek Betts, Jimmy Weeks, John Woods and Adrian Neely; sisters in law, Laura Grady and Margaret Neely, and a host of other family and friends.

Mrs. Martha Lillian Grady Dalton, age 97, departed this life on Monday, February 5, 2018. Martha was born to the Rev. Thomas Alvis Grady and Dovie Bass Grady on November 9, 1920. She was the oldest of five children. Three of her siblings... View Obituary & Service Information

The family of Mrs. Martha Lillian Grady Dalton created this Life Tributes page to make it easy to share your memories.

Send flowers to the Dalton family.