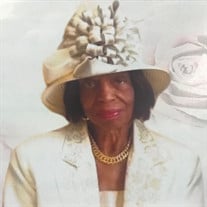 The passing of Mrs. Mary Dasher McAdams, age 90, at Duke Hock Family Pavilion, is being announced by her loving and devoted husband Robert McAdams. Mrs. Mary Ann Dasher McAdams, the only child of the late Dr. John Milton Dasher and the late Mrs. Ruby Armstead Dasher was born March 22, 1931, in Durham, North Carolina. On Saturday, November 20, 2021, Mrs. McAdams answered the triumphant call of her Heavenly Father and transitioned from earthly labor to her heavenly reward. Mrs. McAdams was a lifelong resident of Durham. She was educated in the Durham Public School System and matriculated to higher education at Fisk University, Mrs. McAdams returned to Durham and began her professional career in education with the Durham Public School System. After several years of faithful service, Mrs. McAdams retired from Burton Elementary School in Durham. She also worked as a tax preparer with H&R Block until just a few years ago. Mrs. McAdams was a lifelong member of St. Joseph AME Church and expressed her love for God through service to her church and community. Mrs. McAdams was very active in church activities and was a dedicated disciple who faithfully attended the Minerva Evans Church School Class, Sunday services and was known for dressing elegantly, wearing beautiful suits and matching hats. At St. Joseph, Mrs. McAdams modeled a life of service and leadership. She was appointed a Junior Stewardess by Retired Bishop Philip R. Cousin, Sr. and continued to serve as Co-Chair of Stewardess Board #2 until she transitioned. She served as President of the Lay Organization, Ladies Usher Board, and the Women's Missionary Society. As a member of WMS, she actively participated in Local, Area, District, and Connectional Conferences. In addition to providing outstanding servant leadership to the ministry, Mrs. McAdams organized initiatives and actively participated in several programs that positively impacted members of our church and community. In 1995, she initiated, in partnership with Kappa Alpha Psi of Durham and the Durham Silhouettes (Kappa Wives), the New Coat Drive specifically for Burton Elementary School students. This program continues to the present and has expanded to include three additional Durham Public Schools. In 2005, Mrs. McAdams was instrumental in inviting the first female elected Bishop of the AME Church, Bishop Vashti Murphy McKenzie as guest speaker for the Minnie S. Pearson Missionary Society's Annual Day. In 2020, Mrs. McAdams became a Life Member of the Western North Carolina Conference Branch Women's Missionary Society of the African Methodist Episcopal Church. Mrs. McAdams was mentored by Former Western North Carolina Conference and St. Joseph Lay Organization Past President, Sister Minerva W. Evans. Sister McAdams served the Lay Organization in various offices for over five decades. A faithful, lifelong AME, she served the Lord with gladness, as a former President of Western North Carolina Conference Lay Organization in the year 2002 - 2004, Second Vice President 2000 - 2002, President of the St. Joseph Lay Organization, and member of the Second Episcopal District Executive Board. She served in secretarial positions and on various committees. Mrs. McAdams was a parliamentarian that believed in organizational structure and protocol. She could quote The AME Doctrine and Discipline and the year of the General Conference that ratified changes. She attended AME Connectional, District, Conference, and Area meetings to include the 50th Session of the General Conferences in 2016, WMS Quadrennial Conventions, Biennial Sessions of the Connectional Lay Organization Conventions (delegate), and Second Episcopal District (delegate). Mrs. McAdams traveled with her beloved husband, Mr. Robert McAdams, and her homemade pound cake. As a devoted supporter of youth, Mrs. McAdams was an advocate for the Young People's Division and worked to ensure that they would have whatever was needed. She also contributed to the activities and programs of Girl Scout Troop 711, which included educational trips, World Thinking Day, and The Mother-Daughter Tea. Mrs. McAdams was a soft-spoken woman, who believed in giving God her best. She has had a profound impact on her loved ones, and community and she will be missed. Those remaining to cherish her memory include her loving and devoted husband, Mr. Robert McAdams; extended family members, dedicated caregivers, Ms. Elsie Brandon and Ms. Marie Hunter, and the entire St. Joseph AME Church Family. A celebration of life service to honor the life of Mrs. Mary A. Dasher McAdams will take place on Sunday, November 28, 2021, at St. Joseph AME Church, 2521 Fayetteville Street, Durham, North Carolina 27707, at 2:00 p.m., with a viewing thirty minutes prior to the celebration. Please keep this family in your thoughts and in your prayers.

The passing of Mrs. Mary Dasher McAdams, age 90, at Duke Hock Family Pavilion, is being announced by her loving and devoted husband Robert McAdams. Mrs. Mary Ann Dasher McAdams, the only child of the late Dr. John Milton Dasher and the late... View Obituary & Service Information

The family of Mrs. Mary Dasher McAdams created this Life Tributes page to make it easy to share your memories.

Send flowers to the McAdams family.