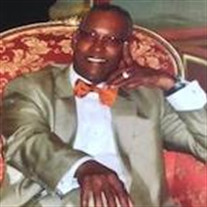 Maurice Butch Adams was born on February 17, 1954 in Queens, NY, to the late Hubert Malloy Adams, and the late Florence Janice Blake Adams. He is preceded in death by his sibling, Ingrid. Maurice passed away peacefully on January 7, 2020, with his wife, Monica by his side. Maurice was educated in the New York City school system, & upon graduating, he pursued a career in Mental Health, at Bernard Fineson Developmental Center, where he worked for 14 years. After dedicating over 20 years of outstanding service to the New York City Department Of Corrections at Rikers Island, he would go on to retire, to enjoy life with family and friends. In his later years, Maurice would go on to meet the Love of his Life, Monica Champion, and have a Fairy Tale wedding that united their love on August 19, 2011. Together, they enjoyed traveling, sporting events, movies, theater, concerts, playing pool, going out dancing, or just sitting on the couch and watching TV. They decided to settle down in North Carolina, where new beginnings began. Maurice lived life abundantly and boldly. He was a family man, who embraced people, and would help you in any way that he could. He was a true lover of Jazz. Had a strong sense of style, where not a day went by that he wasn't at his best. And let's not forget his storytelling, humorous personality, and infectious smile. Oh, what a Beautiful spirit he was! Maurice leaves to cherish his memories, his wife Monica Champion-Adams; daughter, Rise Adams; sons, Maurice Adams Jr., TJ Whitney, Zuri Adams, sister, Althea Adams; four grandchildren, Tantaniya Adams; Kennedy Adams, Gene, and Tranee' Whitney; and a host of nieces, nephews, extended family and friends. A Service of Celebration has been scheduled for Saturday, January 18, 2020, at Scarborough & Hargett Celebration of Life Center, Inc., 309 N Queen Street, Durham, North Carolina 27701. The family will assemble for a visitation from 12:00 noon to 1:00 p.m., followed by the celebration service, at 1:00 respectively.

Maurice Butch Adams was born on February 17, 1954 in Queens, NY, to the late Hubert Malloy Adams, and the late Florence Janice Blake Adams. He is preceded in death by his sibling, Ingrid. Maurice passed away peacefully on January 7, 2020, with... View Obituary & Service Information

The family of Mr. Maurice Butch Adams created this Life Tributes page to make it easy to share your memories.

Send flowers to the Adams family.