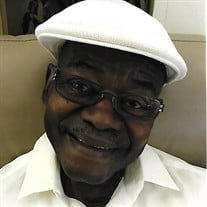 The passing of Mr. Michael R. Curry, age 84, on Thursday, August 13, 2020, at his home, is being announced by his loving wife Precisus. Michael was born in Winston-Salem, North Carolina on May 17, 1936. He was the son of the late Napoleon V. Curry and Janie Mae Curry. At an early age, Michael was raised in Brooklyn, New York. He attended Boys High School. In 1954, he enlisted in the Marines Corp., where he served three years. Michael worked for Transit Authority for twenty-three years before retiring. While living in New York, Michael attended True Holy Church where he was a faithful member, under the leadership of Pastor Harry T. Nance. In 2004, Michael moved to Durham, North Carolina where he moved his membership to Greater Emmanuel Temple of Grace under the leadership of Bishop Marion E. Wright, Sr. Michael served in many auxiliaries at Greater Emmanuel. He served as a Deacon, he was a member of the Usher Board, he was active in the Men's Ministry, he was a Sunday School teacher and sang with the Mass Choir, he also served as a Security Guard. Michael is preceded in death by his first wife, Geneva Curry of forty-five years, his daughter, Deborah Bland and Anissa Barbee and two sisters, Doretha Morris and Marilyn Bridgeforth and grandson David Kirkland. Along with his wife, Precisus, he leaves to cherish his memories his daughter, Dorothy Bailey (Ronald) New York; sons, Wade Kirkland of New York and Larry Barbee, Jr. of Durham, North Carolina; sister, Betty Jean Evans of New Jersey; two nieces, Sharen Evans-Andrews (Steven) and Shannon Bridgeforth both of New Jersey; one nephew, Stanley Bridgeforth of New Jersey; nine grandchildren, Nichole Bland, Vanessa Kirkland, Sylvester Bland, Ron Bailey, Jr., Rachel Bailey-Johnson, Danielle Bailey, Travis Andrews, Keenen King, Larry Barbee, III; twelve great-grandchildren; a cousin Ron Kennedy (Lillie Belle); six sisters-in-law; and a host of extended family members and friends. Viewing for Mr. Michael R. Curry will take place on Wednesday, August 19, 2020, from 1:00 p.m. - 5:00 p.m. at Scarborough & Hargett Celebration of Life Center, Inc., 309 N Queen Street, Durham, North Carolina 27701. A Service of Celebration has been scheduled for Thursday, August 20, 2020, at Greater Emmanuel Temple of Grace, 2722 E. Main Street, Durham, North Carolina 27703. The family will assemble for a visitation from 11:00 a.m. to 12:00 noon, followed by the celebration service, at 12:00 noon respectively.

The passing of Mr. Michael R. Curry, age 84, on Thursday, August 13, 2020, at his home, is being announced by his loving wife Precisus. Michael was born in Winston-Salem, North Carolina on May 17, 1936. He was the son of the late Napoleon V.... View Obituary & Service Information

The family of Mr. Michael R. Curry created this Life Tributes page to make it easy to share your memories.

Send flowers to the Curry family.