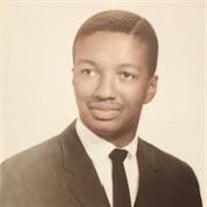 Nathaniel Bradshaw White, Jr. "Buddy", age 75, transitioned from this earthly life on March 19, 2021 in Atlanta, Georgia. He was born on August 10, 1945, the son of Nathaniel Bradshaw White, Sr. and Elizabeth Jean Briscoe White at Lincoln Hospital in Durham, NC. He attended White Rock Baptist Church and was a member of Boy Scout Troop 55 in Durham. Nathaniel was educated in Durham Public Schools and graduated from Hillside High School, class of 1963. He was part of the historical Duke 5, who were the first African American students to integrate Duke University and graduated in the class of 1967. He completed his graduate studies in mathematical statistics at the University of North Carolina at Chapel Hill. Nathaniel married Sylvia Hall in 1971 and they were the proud parents of three children, Angela White-Mason, Natalie White and Jabari White. From 1969 - 1985, Nathaniel served as Commissioned Corp Officer for the Public Health Service and Consulting Statistician for the National Institute of Child Health and Human Development (NICHD) and National Institute of Environmental Health Sciences (NIEHS). In1981, Nat founded the Hayti Development Corporation. From 1991 - 1993, Nat worked for the Center for Neighborhood Development in Knoxville TN. From 1993- 2007, he was the Director of Public Health Sciences Institute and Director of Sponsored Programs at Morehouse University. In 2007, he started Formation Consulting Group where he led to the success of 43 doctoral candidates. Nathaniel's survivors include his daughter, Natalie White; grandchildren, Victoria White-Mason, Jazmine White, Robin Mason, and Christian Thomas; and great-grandchildren, Malichi Watkins and Imani Watkins. Condolences can be sent to Natalie White, 3918 Makeover Court, Atlanta, GA 30349. A tribute article can be found in Duke Today at the following link: https://today.duke.edu/2021/03/nathaniel-white-jr-one-first-black-undergraduates-duke-dies-age-75?utm_source=newsletter&utm_medium=email&utm_content=Nathaniel%20White%20Jr.%2C%20one%20of%20&utm_campaign=dukedaily2021_03_26

The family of Mr. Nathaniel Bradshaw White, Jr. created this Life Tributes page to make it easy to share your memories.