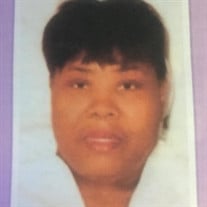 When God picks His special flower from His garden, we should rejoice and say "Hallelujah, thank you God for the many, many memories!" On July 4, 1948, God made a beautiful and unique flower known as Patsy Jean Crosby. Born in Clio, South Carolina, Pat was the second of ten children born to John and Victoria Crosby. At the very moment of the beginning of her life's journey, Pat was destined for greatness. As a young girl, Pat was educated within the Durham Public School System, and at the age of 17, she moved with her family to the state of New York, where she resided for many years until she moved back to Durham, North Carolina. During her early adulthood, Pat found the Lord, Jesus Christ and she followed Him for the rest of her days. In doing so, she became a member of First United Antioch Baptist Church, where subsequently, due to her health, she revised her membership as sick and shut-in. Pat was always a go-getter, traveling to many places to see what the world was all about. In her profession, Pat chose to care for and have a voice for those that some-what couldn't speak for themselves. She always looked out for the "little guy" by dedicating her career as a healthcare provider and a 1199 Union Representative. Pat was a people person and a semi-pro bowler. She was so good at bowling that she, and her teammates, would participate in tournaments with men teams that were ranked superior to her team, and were out of her league. And she would defeat them anyhow! Pat's beautiful spirit will forever be in the hearts of all that loved, and still love her. She leaves to cherish her memory, her siblings, John Crosby, Otis Crosby, Martha Winston, Debbie Hightower, Davie Crosby, Norwood Crosby, Tommie Crosby and Vickie Cradle; her children, Charles Anderson, Ciera Burkes and the triplets, Dougina, Davida and Desirea DeBerry; four grandsons; a granddaughter and grandson on the way; and a host of nephews, nieces, cousins, friends and other relatives and loved ones. A Celebration of Life Service for Patsy will be held on Wednesday, June 16, 2021, at Antioch Baptist Church, 1415 Holloway Street, Durham, North Carolina 27703, at 12:00 noon, with a viewing beginning at 11:30 a.m.

When God picks His special flower from His garden, we should rejoice and say "Hallelujah, thank you God for the many, many memories!" On July 4, 1948, God made a beautiful and unique flower known as Patsy Jean Crosby. Born in Clio, South Carolina,... View Obituary & Service Information

The family of Ms. Patsy Jean Crosby created this Life Tributes page to make it easy to share your memories.

When God picks His special flower from His garden, we should...

Send flowers to the Crosby family.