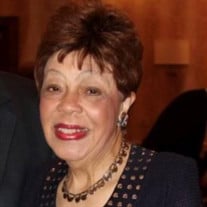 Dr. Patsy Brewington Perry, daughter of the late James C. and Rosa Kirby Brewington, was born in Greensboro, North Carolina on July 17, 1933. At an early age, she moved with her parents to Clinton, North Carolina, where she attended school,... View Obituary & Service Information

The family of Dr. Patsy Brewington Perry created this Life Tributes page to make it easy to share your memories.

Send flowers to the Perry family.