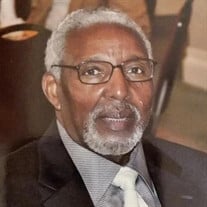 The passing of Mr. Paul Douglas Harrison, Sr., age 81, on Saturday, August 15, 2020, at Duke University Medical Center, is being announced by his loving wife Margaret. Life Profile Paul Douglas Harrison, Sr. Sunrise…OUR BELOVED, PAUL D. HARRISON, SR WAS BORN FEBRUARY 24, 1939 IN GREER, SC. He was the son of the late Paul Harrison and Catherine Jackson Harrison. A Life Well Spent… He was a 1957 graduate of Lincoln High School in Taylors, SC where he was known as BRUISER for the mighty RATTLERS football team. He continued his education at Benedict College in Columbia, SC where he also played football and earned a Bachelor of Science degree in Business Education. He moved to Durham, NC in 1961where he obtained his first job as an instructor with Durham Business College for 18 years. He later returned home that same year where he married the love of his life, his wife, Margaret Wood Harrison. To this union, were born a daughter and a son. Education was very important to him, and teaching was definitely his calling for his earthly life. He dedicated many hours to his college students as well as the many veterans who attended the college at night. The college closed in 1980 but he remained faithful and loyal to dear old DBC, and his students, becoming the President of the Alumni Association until 2012 becoming emeritus. Later, Paul was employed at North Carolina Central University where he worked in the Information Technology field and became a manager. He retired after 30 years of service. He was baptized at the Cedar Grove Baptist Church in Greer, SC before joining Community Baptist Church in Durham, NC where he served as a trustee, and an usher until his health declined. Paul was a great mentor for young boys, teaching them great life lessons as he was a Cub Scout Master for many years, Pack 291. He was an avid sports fan, and a member of the NCCU Eagles Club, and enjoyed attending football games. He was a founding member of the Modern Men’s Club and Husband Wife and Children (HWC) club. He loved to cook and emphasized that the presentation was just as important as the taste of the food. MOTTO: Never let anyone occupy your mind when they are not in your presence. Sunset…PAUL PEACEFULLY DEPARTED THIS LIFE AT DUKE UNIVERSITY MEDICAL CENTER on August 15, 2020.He was preceded in death by his brother, Dan Harrison; his sisters-in-law, Mildred Blakeney Harrison and Susie Walker Wood. Those Who Remain…HE LEAVES TO CHERISH LOVING Along with his wife, Margaret, Paul leaves to cherish his memories his two children, son, Paul D. Harrison, Jr. and daughter, Glenda R. Harrison; brother, Gaither L. Harrison; sister, Phyllis Harrison Murphy (Willie); and a host of extended family members and friends. Viewing for Mr. Paul Douglas Harrison, Sr. will take place on Thursday, August 20, 2020, from 3:00 p.m. - 7:00 p.m. at Scarborough & Hargett Celebration of Life Center, Inc., 309 N Queen Street, Durham, North Carolina 27701. A private family graveside service will take place at Beechwood Cemetery.

The family of Mr. Paul Douglas Harrison, Sr. created this Life Tributes page to make it easy to share your memories.

Send flowers to the Harrison, family.