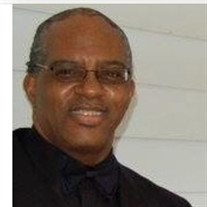 Condolences are being expressed to the family of Mr. Richard Butler, age 66, who passed away on Thursday, April 18, 2019, at Duke University Hospital. Brother Richard Butler was born on December 21, 1952 to Virginia Butler Kelley and the late James Butler, Sr. in Philadelphia, Pennsylvania. He was a graduate of Overbrook High School in Philadelphia. Upon graduating from high school, Richard moved to Durham, North Carolina, where he attended North Carolina Central University. He majored in Music and this was a true love of his. Richard met and married his wife, Vanessa, in 1994. Richard was employed with Duke Medical Center, where his career spanned 30 years. Richard had a rich baritone voice, and he took pride in sharing this gift. In his love for singing, he sang with an acapella group that performed at various events and did Christmas caroling each year. He performed often in the Duke Show Tunes event as a Duke employee. He was a member of the Kent Brooks Ensemble during his time at Greater St. Paul Church. He was also a current, dedicated member of the 100 Men in Black Choir, and was known in the Choir as "Bowtie". He sang at weddings and other special occasions, and he was active with this passion for music until his health failed. Richard attended First Calvary Baptist Church and was a longtime supporter of the Ministry. He was a man given to prayer, and he was always ready to pray for others. Surviving relatives include his loving wife, Vanessa Butler; his daughter, Tina Outen of Durham; his mother, Virginia Butler Kelley of Philadelphia, PA; his brother, James Butler, Jr. of Philadelphia, PA; his aunt, Bessie Butler of Philadelphia, PA; his grandchildren, Jatovie of California, Sade (Carlos) and Torian of Durham, NC; his brothers-in-law, Norman Smith (Esther) of Washington, DC, Frezell Outen (Susan) of Portland, OR, Robert Outen and Larry Outen both of Durham, NC; his sisters-in-law, Linda Evans, Robin Outen Leathers (Wayne), and Michelle Brockington (Alphonso) all of Durham, NC; two great-grandchildren, Christian and Joel; and a host of nieces, nephews, cousins, and other relatives and friends. Funeral services will take place on Thursday, April 25, 2019, at First Calvary Baptist Church, 1311 Morehead Avenue, Durham, North Carolina 27707. Family members will greet friends at 11:00 a.m. and the service will follow at 12:00 noon.

Condolences are being expressed to the family of Mr. Richard Butler, age 66, who passed away on Thursday, April 18, 2019, at Duke University Hospital. Brother Richard Butler was born on December 21, 1952 to Virginia Butler Kelley and the late... View Obituary & Service Information

The family of Mr. Richard Butler created this Life Tributes page to make it easy to share your memories.

Condolences are being expressed to the family of Mr. Richard...

Send flowers to the Butler family.