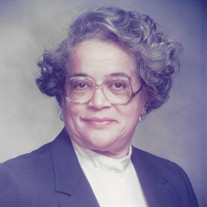 Mrs. Addie Ruth Mack Pridgen has now accepted the most meaningful of life’s invitations..come ye blessed my Father; inherit the kingdom prepared for you. Mrs. Pridgen was born September 26, 1928 to the late Lena Grace and John Wesley Mack, Sr. of the Lebanon Township Community of Durham County, N.C. She was one of thirteen children born to this union where she learned early examples of deep love, how to care and share and to be humbly rooted and grounded in God’s way. She was educated in the Durham County Public School System having graduated from Little River High School in 1946. She furthered her education at Hampton Institute (now Hampton University) and later received her Bachelor of Science degree in Home Economics and General Science from North Carolina College (now North Carolina Central University). She also received her Master of Science degree from the same university. In 1948, she was married to James H. (June) Pridgen, Jr. There were no children born to this union. She assisted her husband’s family in the ownership/operation of the infamous “Quality Food Super Market” (pre-cooked chitterlings) which was located on Pettigrew Street. Furthering her commitment to education, Ruth began her long and dedicated career in education in Raeford, North Carolina. After thirteen years of service, she returned to Durham and taught at Merrick Moore School, Carrington Junior High and later retiring from Northern High School in 1991. Mrs. Pridgen was an active member of Cain’s Chapel Missionary Baptist Church where she received her early religious principles and doctrines. There she served with the Missionary Auxiliary and the Usher Board, serving as Past President. She was also affiliated with St. Joseph AME Church in Durham, N.C. where The James H. Pridgen Family attended. Ruth was a dedicated member of the National Sorority of Phi Delta Kappa, a member of Durham’s Retired School Personnel, A Life-Time Member of NEA and AARP. Ruth and her husband, being advocates for education, assisted in the care and education of some of her many nieces and nephews, and Ruth and James took great pride in their accomplishments. She was preceded in death by her parents, seven brothers…Claude, Amos, Norman, Joe, John, Robert, and Russell; three sisters…Ollie, Luna and Louise. Mrs. Pridgen transitioned on December 28th leaving precious memories for survivors: Pearl Mack Holman and Juanita Mack Shaw (Willie) of Hillsborough, North Carolina; brother-in-law, Clyde Long, Sr. of Durham, N.C.; and numerous nephews, nieces, cousins and other devoted descendants. The family wishes to express our deepest gratitude and sincere thanks to the Addison Senior Lifestyle of Durham (formerly…Carrilon Assisted Living), Kindred Hospice Care and caregivers Deborah Scurlock Evans, Phyllis Edwards and Kenneth Ray Whitted. God Bless You. In lieu of flowers please make donations to: Cain’s Chapel Missionary Baptist Church’s Ministry of your choice Cain’s Chapel Missionary Baptist Church P.O. Box 73137 Durham, North Carolina 27722 A graveside service of celebration has been scheduled for Saturday, January 2, 2021, at 11:30 a.m. at Beechwood Cemetery, 3300 Fayetteville Street, Durham, North Carolina 27707, with viewing from 11:00 a.m. - 11:30 a.m. In every effort to keep everyone safe, face coverings will be required along with practicing social distancing for the graveside service.

The family of Mrs. Ruth M. Pridgen created this Life Tributes page to make it easy to share your memories.