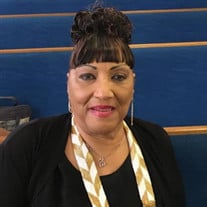 Sandra Mae Knowles, age 78, of Durham, North Carolina, left this earthly life to be in the presence of her Lord Jesus, on Saturday, February 27, 2021. Sandra Mae was born to her parents, Lonnie and Gloria Wilson on September 20, 1942, in Bronx, New York. Sandra lived in Bronx, New York until 1989 where she then relocated her family to Durham, North Carolina followed by a plethora of cousins and friends. From New York to North Carolina, she was a pillar in her community. She took care of neighborhood children and many others. She was a loving, caring mother to everyone. When Sandra first moved to North Carolina, she and her mother bought a house on Hill Street. This was the place to be. Sandra knew everyone in the neighborhood and everyone had nothing but good things to say about her. One thing that was important to her and her household was that on New Year's Eve only a man could be the first person to walk through the door. Sandra's house was the spot for parties, businesses, and much love. Sandra worked at the State Board of Elections in New York City. In North Carolina, she worked at Belk's in the China Department. She also volunteered for the Red Cross. She appreciated the time she got to spend with close friends. Her best friends of 50 years were Rheva Morris and Cynthia Murray. They loved to rip and run the streets. Sandra also talked to her cousin Marion everyday. Sandra was a member of Agape Christian Church, Inc., formerly known as Palmers Memorial Holiness Church, which she was then led by the late Pastor Roy C. Belon. As being a member of the church, Sandra was a participating member of the choir, and various activities and programs. Sandra was known for being dressed to the "T" and being "blinged out". Her cooking was second to none and everyone could agree. She was known for her famous Potato Salad and Turkey Wings. Although Sandra was the only child, she was the oldest cousin and the glue of the family. Coming from a small immediate family, she made up for it. Sandra went on to have a family of nine kids, eight boys and one girl. She also had 17+ grandkids including Dakota Webster, seven great grandkids and a host of cousins who she loved dearly. Sandra was preceded in death by: Gloria and Lonnie Wilson, and her last born son, Jason Knowles. She leaves behind to cherish her memory her daughter, Valerie Webster (Cleveland, deceased); sons, Andre Knowles, Anthony Knowles, Wilbert Knowles (Alicia), Lonnie Knowles (Melva), Allen Thomas, Lance Knowles and Troy Knowles (Sherrica); seventeen grandchildren; seven great grandchildren; and a host of extended family members and friends. A graveside funeral ceremony will be held on Friday, March 5, 2021 at 12:30 p.m., with viewing from 12:00 noon - 12:30 p.m., at Glennview Memorial Park, NC Hwy 55, Durham, North Carolina 27713. In every effort to protect our families and their guests, face coverings are required.

Sandra Mae Knowles, age 78, of Durham, North Carolina, left this earthly life to be in the presence of her Lord Jesus, on Saturday, February 27, 2021. Sandra Mae was born to her parents, Lonnie and Gloria Wilson on September 20, 1942, in Bronx,... View Obituary & Service Information

The family of Mrs. Sandra Knowles created this Life Tributes page to make it easy to share your memories.

Send flowers to the Knowles family.