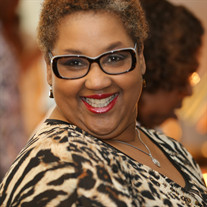 On September 19, 1966, our world was made better by the birth of Sanya Evete Alexander. She was born to Redditt and Ida and remained their only child. But sometimes one is enough! Sanya was a high energy baby and was the toddler that no one could really keep up with. So it stood to reason that her life would represent excitement and love and joy-and these were the gifts that she gave to her family without fail. Let's take a moment now and play back the "video"of Sanya's life and get a better glimpse into the person that's brought us all here today. Sanya was educated in Durham Public Schools. Her jovial and kind spirit caused her to make friends easily-some of those friendships, like Shirlrona Phillips Johnson, lasted throughout Sanya's lifetime. These tow met at Hillside High School where they were members of the marching band. Sanya played the clarinet and enjoyed-to the fullest-all that came along with being a young girl with a promising future. Some of the activities that helped to shape that future included her committed involvement in the Girl Scouts and the youth choir at her home church, Community Baptist. It was during her youth that she recognized the need for an enduring faith, causing her to accept Christ as her Lord and Savior. She would later need to stand on the very faith that she discovered in her early life. After graduating from Hillside High School in 1984, Sanya went on to become a Hampton Pirate at Hampton University. It was a dream come true! While there, she was a member of "The Force," the mighty HU marching band. As an accounting major, Sanya was still able to enjoy college life, make countless friends, and complete her degree in 1988. It was at HU that Sanya met and became roommates with Bridgett Watkins who would later become her sorority sister. One year after college graduation, Sanya fulfilled her longtime dream of becoming a member of the "first and the finest"-Alpha Kappa Alpha Sorority, Inc.-on April 8, 1989 with the Mu Omicron Omega Chapter. From that moment on, it was all things pink and green. Sanya was a committed member of her sorority and served as a graduate advisor for the Theta Pi Chapter at the University of North Carolina at Chapel Hill. But in true Sanya style, she served in various roles in the sorority, chaired various committees, and was recognized for her service. In 2014, Sanya became a Silver Star, with 25 years of service to the sorority that she held near and dear, later becoming a Life Member. She enjoyed and looked forward to attending sorority -related events with her relatives that were also in the sorority. It really was all about AKA! Sanya worked with the family company, Alexander and Associates, after graduating from Hampton, becoming a real estate agent and the director of property management. As a math teacher at Neal Middle School, Sanya also did private tutoring-all in Durham. In the city of Durham and beyond we all know that the best that happened to Sanya was the gift called Bria Lauren Adams, her only child, born on March 1, 1995 at Durham Regional Hospital, to Sanya and her now ex-husband, Troy. But everything must change, Sanya and Bria headed to Virginia, leaving the Bull City behind, to start afresh. While in Newport News and Norfolk, V.A., Sanya worked as a property manager, was active with her local AKA chapter and later moved to Franklin, V.A., where she was the Director of Housing Management-Franklin Redevelopment & Housing Authority for the City of Franklin. She was a devoted member of the Lambda Psi Omega Chapter of Alpha Kappa Alpha Sorority, Inc. in Franklin and could be found in service with AKA on any given day. Sanya and her beloved daughter were inseparable and she did all that she knew how to be the best Mom that she could be-from hosting prom night parties to making sure that Bria understood the need for Christ. She was a working Mom raising her daughter, active in community service, and still found the time to complete her MBA at the University of Phoenix just a few years ago. Everything mush change-but not Sanya's faith, determination, and strength. In early 2016, Sanya was diagnosed with Stage 4 Colon Cancer, yet, she continued working and doing all the things that brought joy to her life. She never really missed a beat and remained, until her last breath, the consummate example of what the name "Sanya" means: brilliant; radiant. She took the time to look stylish, to mentor those around her, and to provide a light of kindness and love. And even though, she slipped away from us on Sunday, September 30, 2018, surrounded by her loved ones in her parents' home, her brilliance, her radiance will stay with each of us....Forever. Left to celebrate Sanya's wonderful life and legacy, are her parents Redditt and Ida Alexander, Durham, N.C., one daughter, Bria Adams, Franklin, V.A., god-sisters Delisia Matthews, Raleigh, N.C. and Zenita Garvin (Joshua), Centerivlle, V.A. She also leaves her aunts which include; Beatrice Sauls, Boston, M.A., Mattie Miles (Joe), Kinston, N.C., Negleathia Johnson (Jimmy), Clifton, V.A., Carrie Ann Burks, New Orleans, L.A., and Tercolia Reaves, Greensboro, N.C.; two uncles, Frank Alexander, New Orleans, L.A. and John D. Burks, Jr. (Joanne), New Orleans, L.A. Among her many special friends are high school classmate Shirlrona Johnson, Ron and Katherine Hunter, Mabel Jones Matthews and Daphne Darden. The host of other relatives and friends that Sanya leaves behind is a testament to the impact her life had on those whose lives she touched.

On September 19, 1966, our world was made better by the birth of Sanya Evete Alexander. She was born to Redditt and Ida and remained their only child. But sometimes one is enough! Sanya was a high energy baby and was the toddler that no one... View Obituary & Service Information

The family of Mrs. Sanya Alexander Adams created this Life Tributes page to make it easy to share your memories.

Send flowers to the Adams family.