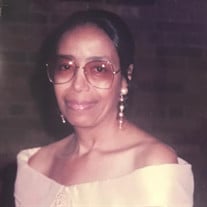 The family of Shirley Dudley Brown, age 80, wishes to announce her passing on Saturday, April 6, 2019. Shirley Dudley Brown was born October 6, 1939, in Bayboro, North Carolina, the seventh of nine children to the late McKinley and Mary Alice Tingle Dudley. Shirley was baptized at an early age and enjoyed a childhood surrounded by a large and supportive family. "Joyce", as she was affectionately known by her parents and siblings, attended the Pamlico County School System where she was an excellent student and was active in school clubs and sports. Shirley later attended North Carolina College at Durham (NCCU) where she majored in Accounting and was a member of Alpha Kappa Alpha Sorority. It was at NCCU that she met her future husband, Biology major Hayes W. Brown of Ahoskie, NC. Shirley began working in the Bursars Office at North Carolina Central University upon graduating from college, embarking on a 30-year career with the University in Federal and Trust Accounting and Accounts Payable, until her retirement as Assistant Comptroller. Shirley and Hayes were married for 45 years. Their union was blessed with a son, Michael Delane Brown. Shirley was a loving and devoted wife, mother, and grandmother. She greatly enjoyed spending time with family and spoiling her granddaughter. She was also an avid supporter of her alma mater. Shirley enjoyed attending Eagle football and basketball games with her family, and participating in alumni graduation class events. Shirley remained in Durham in the years following her husband's death, continuing to actively support her family, friends, loved ones, and those activities that she held dear. She leaves to cherish her memories, a son, Michael Brown (Vicki) of Sanford, NC; a granddaughter, Kristina Brown of Sanford, NC; a goddaughter, Angelia Duncan of Atlanta, GA; two sisters, Ellen Dudley and Barbara Best both of Bayboro, NC; two sisters-in-law, Jewel Mitchell of Durham, NC and Wanza Dudley of Edward, NC; and a host of nieces, nephews, cousins and friends. Funeral services will take place on Saturday, April 13, 2019, at Community Baptist Church, 4821 Barbee Road, Durham, North Carolina 27713 at 1:00 p.m., with a family visitation half an hour prior to the service.

The family of Mrs. Shirley Dudley Brown created this Life Tributes page to make it easy to share your memories.

The family of Shirley Dudley Brown, age 80, wishes to announce...

Send flowers to the Brown family.