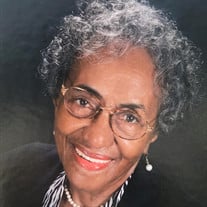 The passing of Mrs. Thelma Delores Lee, age 97, is being announced by her sister Gizette. Thelma Delores Jones Lee was born April 30, 1923 in Durham, North Carolina to her parents, Charlie Jones and Flossie Crabtree Jones Webb. She is the third of six children born to Mr. Jones and the third of five children born to Mrs. Webb. Thelma attended Lyon Park Elementary School and Hillside High School. During that time, Hillside held classes from the seventh to eleventh grades and was located in the building that later became Whitted Jr. High School. She graduated around 1939 or 1940. Thelma also attended North Carolina College for two years. Thelma married Chief Warrant Officer/Sgt. William D. Lee in 1956. They were married for 43 years. Thelma and William aka "sweetie pie" and "honey" respectfully, renewed their wedding vows in 1996 on their 40th Anniversary. They used these terms of endearment in speaking to each other routinely. She lived as a military wife for 20 years. They lived in Japan and Germany for several years and for a short period in England. She and her husband travelled extensively, visiting Canada and Mexico in North America. They also travelled to Central America and to many of the islands in the West Indes. They additionally traveled a lot in the USA. Thelma was widowed in 1999. Professionally, Thelma worked in clerical positions in Washington, DC and New York City during her early years of employment. She returned to Durham and worked as a DJ for WSRC radio station for several years during the fifties. Thelma was the first black female DJ in Durham. Upon returning to Durham in the seventies, Thelma was employed at Lyon Park Community Center and at General Telephone Co. She retired from General Telephone Co. after 15 years of employment. After retirement, Thelma volunteered at the VA Hospital in Durham for over a decade. Thelma was a member and past president of the Epicureans, the Bridge Club, the National Council of Negro Women, the West End Reunion, and the Silhouettes-Kappa Wives. Thelma joined First Calvary Baptist Church when it was a part of Second Baptist Church located on Cameron Street which is now Carroll Street. She often spoke of living across the street from the church and of going out of the back door of the family home place to enter the church. Thelma was the Matriarch of the Jones-Davis-Riley Family. Along with sister Gizette of Durham, Thelma leaves to cherish her memory her nephews, Ronald Britton (Jean) of New Orleans, LA, James Morgan of Washington, DC and Zaid Morgan of Washington, DC; niece, Michelle Williams of Washington, DC; cousins, Lola Brown (Chuck), Charlene Clay (Tyrone), Marsha Hines (Kenny) and Rod Barbee; special friends, Mary Yound, Ronnie Brandon, Vincent Ryan and Emily and Charlie Scott; adopted son, John Harris (Stephanie); Godchildren, Glenda Ochman (Tad) and Raymond McAllister, Jr.; and, many other relatives and friends. A graveside service of celebration has been scheduled for Wednesday, December 23, 2020, at 12:00 noon, at Beechwood Cemetery, 3300 Fayetteville Street, Durham, North Carolina 27707.

The passing of Mrs. Thelma Delores Lee, age 97, is being announced by her sister Gizette. Thelma Delores Jones Lee was born April 30, 1923 in Durham, North Carolina to her parents, Charlie Jones and Flossie Crabtree Jones Webb. She is the... View Obituary & Service Information

The family of Mrs. Thelma Delores Lee created this Life Tributes page to make it easy to share your memories.

The passing of Mrs. Thelma Delores Lee, age 97, is being announced...

Send flowers to the Lee family.