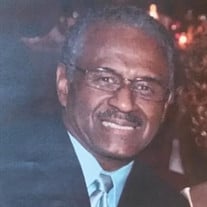 The passing of Mr. Thomas Earl Cameron, age 77, on Friday, March 25, 2022, at his home, is being announced by his loving and devoted wife of 50 years, Barbara C. Cameron. Thomas Earl Cameron, the second youngest of seven children, was born on April 1, 1944, in Durham, North Carolina to the late Henry Hudson and Estella Stewart Cameron. He attended Hillside High School and after graduation went on to graduate from North Carolina College at Durham (now known as North Carolina Central University) with a Bachelor of Science degree in Physical Education. While in college, Thomas was a member of the Football team and was selected to be included in the 1969 edition of Outstanding College Athletes of America for his outstanding athletic ability, accomplishments, and service. Thomas was drafted and inducted into the United States Army on March 19, 1969. He was deployed to the Republic of South Vietnam on August 17, 1969, where he served until August 15, 1970. He earned the rank of Sargent in sixteen months. While serving in the Army, Thomas worked as an Indirect Fire Infantryman and Section Chief of an 81-millimeter mortar team. He also led “fire teams” for camp security where he often had to operate in shoulder high “elephant grass”. Thomas was awarded the National Defense Service Medal, Combat Infantryman’s Badge, Air Medal, Army Commendation Medal, Good Conduct Medal, Vietnamese Service Medal with two Bronze Service Stars, Vietnamese Campaign Medal with 60 Device, and the Vietnamese Gallantry Cross. As a dedicated civil service servant, Thomas worked 32 years for United States Postal Service. He started his career as a letter carrier and retired as the manager of the Eno Valley Post Office. Thomas later returned to work as a consultant with the Employment Security Service Commission of North Carolina (now known as North Carolina Department of Commerce) for 12 years. His zeal and hard work to serve others was recognized when he was awarded the Governor’s Award for Excellence in 2010 for his outstanding dedication and commitment to the citizens and state of North Carolina. Thomas was an active member of Mount Level Missionary Baptist Church in Durham, North Carolina. Many will remember Thomas for his welcoming presence and willingness to help those in need. As a dedicated member he served as the chairperson for the usher board for numerous years, a former trustee, and member of the transportation committee. Thomas was preceded in death by his parents, his brothers, Henry, Jr. “Red”, John “Pete”, James Herbert, and two sisters, Emma and Rachel. Thomas was a devoted husband, father, grandfather, uncle, and friend. He will always be loved and cherished by Barbara Cameron, his wife of 50 years; two sons – Stefan of San Jose, California (Erika) and Dorian of Mableton, Georgia (Cameron); a sister Betty Nichols of Concord, North Carolina; six grandchildren, Stefan, Jr., Morgan, Austin, Kennedy, Dylan, and Grant; a host of nieces and nephews along with many other relatives and friends. Services to celebrate the life and legacy of Mr. Thomas Earl Cameron are as follows: Public Viewing, Friday, April 1, 2022, at Scarborough & Hargett Celebration of Life Center, Inc., 309 N Queen Street, Durham, North Carolina 27701, from 2:00 p.m. - 6:00 p.m. Viewing, Saturday, April 2, 2022, from 12:00 noon until 12:55 p.m., at Mount Level Missionary Baptist Church, 316 Hebron Road, Durham, North Carolina 27704, with the service beginning at 1:00 p.m. Interment will take place immediately following the Celebration of Life Service in the Mount Level Missionary Baptist Church Cemetery. To view the Celebration of Life Service for Mr. Cameron, please do so through the Facebook page of Mount Level Missionary Baptist Church, or the church’s website. Please keep this family in your thoughts and in your prayers.

The family of Mr. Thomas Earl Cameron created this Life Tributes page to make it easy to share your memories.

Send flowers to the Cameron family.