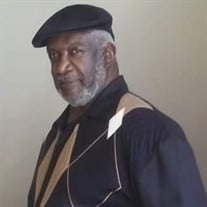 Condolences are being expressed to the family of Mr. Thomas Jackson Williams , age 74, who passed away on Wednesday, June 3, 2020 at the Brian Center Southpoint. Thomas Jackson Williams was born November 30, 1945 to Matthew Williams and Thelma Stuart Williams in Bennettsville, SC. Thomas attended public schools in Hamlet, North Carolina and graduated from Monroe Avenue High School in 1964. He loved sports and played on the high school football team. He also sang tenor in the school choir, and what a beautiful voice he had. After graduation, Thomas enlisted in the United States Marine Corp as a Reserve. He served in active duty from 1968 to 1970 and was honorably discharged in 1970 after serving two years in the Vietnam War. Thomas continued his education and attended Richmond Community College in Hamlet, NC, Rutgers and NCCU in Durham, NC. He was a prolific writer. He would often write poems that was put to music and drums by the renown Chuck Davis Performing group. Thomas worked as a cabinet maker in Durham and after many years retired from the VA hospital where he worked in housekeeping. He was a proud family man. His love for God and his love for all his family members was a perfect example of what families should reflect. He taught us well. He was the “Life of the Party.” He was personable, didn't forget birthdays, treated all his children, grands, nieces, nephews, family and friends as if they were the most favorite and important person in his life. Thomas sometimes affectionately called “T.J.” is deeply loved and leaves to cherish his memories: his loving wife, Carol; three daughters, Ruth Williams, Sylvia Williams and Tonya Sloan of Durham; one son, Travis Sloan of Durham; two sisters, Thelma Louise Haliburton of Hamlet and Mattie L. Muwwakkil of Durham. Thomas was blessed with six grandchildren: Antonio Williams, Racquel Williams, Da'Nashia Sloan, Scott Sloan, Deon'dre Sloan and Raheem Sloan. He had four great grandchildren: (Lil) Antonio Williams, Angelle Monroe-Williams, Maddison and Paige Barrett. He shared many years with eight Sisters In Law: Doris Williams of Hamlet, Brenda Johnson of Philadelphia, Hermina Bostic Williams of Fayetteville, Patricia Perry of Raleigh, Mary McBride, Lynn Sloan, Leah Williams of Butner and Debra (Smokie) Sloan of Durham. Three Brothers In Law; William E. O'Farrow of Durham, Robert Sloan and Finalgene Sloan of Pittsburg. Thomas was preceded in death by his loving parents, Matthew and Thelma Williams, wife Barbara Bostic Williams, and brother James E. Williams. He will be missed, but we Celebrate the Love he gave and Life he lived. Viewing for Mr. Thomas Jackson Williams will take place on Tuesday, June 9, 2020, from 4:00 p.m. - 6:00 p.m. at Scarborough & Hargett Celebration of Life Center, Inc., 309 N Queen Street, Durham, North Carolina 27701. A Service of Celebration has been scheduled for Wednesday, June 10, 2020, at 1:00 p.m. at Scarborough & Hargett Celebration of Life Center, Inc., 309 N Queen Street, Durham, North Carolina 27701. Mr. Thomas Jackson Williams will be laid to rest in Glennview Memorial Park.

The family of Mr. Thomas Jackson Williams created this Life Tributes page to make it easy to share your memories.

Condolences are being expressed to the family of Mr. Thomas Jackson...

Send flowers to the Williams family.