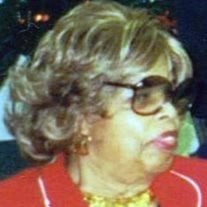 Virginia Caesar Reed, lovingly known as GiGi, the last surviving sister of Gospel Legend, Pastor Shirley Caesar, went home to be with the Lord Sunday, March 9, 2014, after a long illness at the Uni-Health Medical Facility in Durham, North Carolina. She was born August 13, 1924, one of thirteen children to James and Hallie Caesar. Her father, affectionately known as “Big Jim Caesar” was a noted gospel singer and as a child she often sang with him. She resided in New York City for over 60 years before moving back home to Durham. Virginia was known for her melodious voice and her witty sense of humor. Even in her illness she never lost her desire to sing the “Old Hymns,” nor her zest for a life filled with joy. She is survived by two brothers, Julius and Solomon Caesar, both of Durham N.C., one sister, Pastor Shirley Caesar-Williams of Raleigh, N.C., and a host of relatives and friends. Service will be held Sunday, March 16, 2014 at 2:00 p.m. at the Mt. Calvary Word of Faith Church, 3100 Sanderford Road, Raleigh, North Carolina. Viewing will be held from 1:30 p.m. to 2:00 p.m. Interment will be Monday at 11:00 a.m. at Beechwood Cemetery, Durham, North Carolina.

The family of Mrs. Virginia Caesar Reed created this Life Tributes page to make it easy to share your memories.

Send flowers to the Reed family.