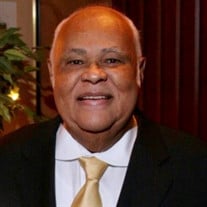 It is with profound sadness that we announce the passing of Attorney Wade Wayne Perry. Wade Wayne Perry, Esq., departed this life quietly and peacefully in his sleep on Saturday, September 21, 2019. Though he had struggled valiantly on dialysis for a few years, he was on his feet until the end. Wayne was born on March 13, 1931 in New York City, the first of two sons, of the late Dr. George Robert Perry and Mrs. Eula Wade Perry. After young Dr. Perry’s death, Mrs. Perry brought her sons to Durham where they grew up and were educated. A graduate of Hillside High School, Wayne attended North Carolina College at Durham, from which he received the B.A. degree in history in 1952 and the J.D. degree in 1955. On December 23, 1955, Wayne was married to Patsy Brewington. One child, Wade Wayne Perry, Jr. was born to the couple in 1958. Wayne pursued post-graduate education, namely Practice in the Supreme Court of North Carolina, Institute of Labor Law, New York University; Practice in the Court of Claims; and Management Training-American Life Convention at Princeton University. Wayne was employed at North Carolina Mutual Life Insurance Company as an agent in 1955, and progressing steadily through numerous positions, including Special Home Office Assistant; Acting Claims Supervisor; Assistant Secretary to the General Counsel; Assistant Secretary and Assistant General Counsel; Vice President and General Counsel; Senior Vice-President and General Counsel; Member of the Board of Directors; Senior Vice-President, General Counsel and Corporate Secretary; Chairman of the Field Service Committee; and member of the Executive Committee. He chaired the Claims Committee, and Bargaining Committee, the Claims Task Force, and the MDO Task Force. He was a member of the Mortgage and Realty Committee, the Field Committee, the Underwriting Committee, and the Profitability Committee. Often a voice for the Mutual, Wayne was Guest Speaker in Detroit for the 1984 Mass Issue Kick-Off. He retired on June 30, 1990 after thirty-five years of dedicated service. After his retirement, Wayne continued to manage his private law practice, where, as with the Mutual, his well-informed, frank-and sometimes blunt-reasoning, advice, and thoughts were received with attention and respect, if not always with agreement. All knew that even when circumstances demanded harsh consequences, Wayne always acted with honesty and compassion. Wayne’s professional affiliations include membership in The Association of Life Insurance, Counsel, Board of Directors of North Carolina Life and Health Insurance Guaranty Associate, Executive Committee of the Association of North Carolina Life Insurance Companies, ACLI Home Security Life Insurance Task Force (Washington, DC), the National Bar Association, The George H. White Bar Association, the North Carolina Black Lawyers Association, and the North Carolina Health Insurance Advisory Board. He served as General Counsel for the National Insurance Association. He was a member of Alpha Phi Alpha and Sigma Pi Phi Fraternities. During the 1960s he was a member of the Board of Trustees at St. Joseph AME Church, of which he was a life-long member. Anchored with his family in his church and in his profession, Wayne made all of Durham his neighborhood. Gregarious and fun-loving he knew almost everyone in Durham, and all who knew him experienced his warm, greeting and infectious smile, his hearty laughter, and his easy teasing. Wayne enjoyed fellowshipping with friends, especially at events at North Carolina Central University and at the North Carolina Mutual Life Insurance building. His never-to-be forgotten 2019 Super Bowl Sunday was what proved to be a fitting final at-home event for him. Wade Wayne Perry is survived by his loving and devoted wife, Dr. Patsy Perry; his son, Wayne, Jr.; his daughter-in-law, Angela; grandchildren, Wade Wayne Perry, III, Christian Smith and Alexis Smith; and great granddaughter, Skylar Perry. Left to cherish his memories, also, are his brother, Gordon Robert Perry; his niece, Tama Ann Perry; great-niece, Zoe Bass; and cousins, George Wayne Cox and Anita Cox Cobbs. In addition, are countless extended family members and friends in whose hearts and minds Wayne will live forever. A celebration of Wayne’s life will be held at St. Joseph AME Church, 2521 Fayetteville St., Durham, North Carolina 27707 on Saturday, October 5th; Family Visitation at 1:00 p.m. and Life Celebration Memorial Service at 2:00 p.m. For any family, guest or friends needing hotel accommodations for the weekend of Attorney Wade Wayne Perry's Homegoing Celebration, please contact the Courtyard Durham Research Triangle Park at 919 484-2900 for reservations no later than Tuesday, October 1, 2019.

It is with profound sadness that we announce the passing of Attorney Wade Wayne Perry. Wade Wayne Perry, Esq., departed this life quietly and peacefully in his sleep on Saturday, September 21, 2019. Though he had struggled valiantly on dialysis... View Obituary & Service Information

The family of Attorney Wade Wayne Perry created this Life Tributes page to make it easy to share your memories.

It is with profound sadness that we announce the passing of Attorney...

Send flowers to the Perry family.