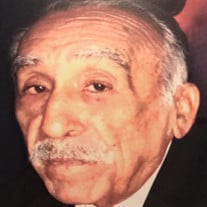 Walter "Kyser" Wilson was born May 20, 1932, the next to the oldest of Evelyn and Jake Wilson's children. He met Fr. Risacher around1945 and was enamored with him and his faith. He started 1-on-1 Catechism Study with him to become a Catholic. He completed his study in one year, was baptized on March 24, 1948 and received his 1st Communion the next day. He was Holy Cross's 1st latin speaking Alter Boy. A day after graduating from Hillside High School in 1950, Kyser went on to support his family by enlisting in the United States Air Force. While on a short leave he met the love of his life, Elviolet Atkins, who also converted to Catholicism. They married October 20, 1962 at Immaculate Conception Catholic Church. He continued to serve our country for 20 years and fought in both the Korean and Vietnam Wars, retiring as Technical Sergeant in 1970. Soon after retiring, he attended North Carolina Central University, graduating with a degree in Sociology. During his military career, in 1963, Kyser chose to move to Montgomery, Alabama to help Dr. Martin Luther King, Jr. in his fight for Civil Rights. He served as the head of Dr. King's Audio-Visual Department. On August 6, 1965, Kyser, Alabama Democratic Representative, was present with President Lyndon B. Johnson as he signed The Voting Rights Act. He continued to live his life paying it forward. At Holy Cross, he was a chartering and founding member of The Holy Cross Men's Society, Knights of Columbus, and Sacristan. Also, for the Durham Community, he helped charter and found the Durham County Child Advocacy Commission, Durham County Relations Committee, and the Durham County Mental Health Advisory board. In 1973, Kyser was appointed as the Director of Minority affairs at WTVD-11 Television Station. He used this platform and hosted "Ebony Directions," a show that focused on the problems and concerns of the black community in Durham. To Kyser and Elviolet, family was paramount. They had six children, Michelle, Kyser Michael, Seleka (Michael), Nicole, Mark and Lamar "Scotty." His legacy lives on through his fourteen grandchildren: Jantzen, Jared, Jordan, Daron, Christopher, Bryan, Aliyah, Alexus, Brandon, Sophia, Alaina, Mace and one great-grandchild, Ciara. He is survived by his sisters Evelyn Marie, Sandra and Virginia; his brothers Herman, Michael, Frank and Henry; his sisters and brother-in-law Ann, Geraldine, Pete and numerous nieces, nephews, and friends.

Walter "Kyser" Wilson was born May 20, 1932, the next to the oldest of Evelyn and Jake Wilson's children. He met Fr. Risacher around1945 and was enamored with him and his faith. He started 1-on-1 Catechism Study with him to become a Catholic.... View Obituary & Service Information

The family of Mr. Walter James "Kyser" Wilson created this Life Tributes page to make it easy to share your memories.

Send flowers to the Wilson family.