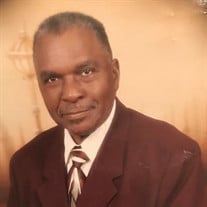 Deacon Wilbert Fryar, the son of the late Reverend William and Beulah Cox Fryar, was born September 2, 1933 and departed this life on Sunday, October 28, 2018 after a lengthy illness. He was the third sibling of six brothers and one sister. Deacon Fryar received his education in the Sampson County Public School system in Clinton, N.C. He later moved to Durham, N.C. and married the late Josanne Peacock. To this union three children were born-Marsha, Regina and Tim and received his stepson, Dwight. Deacon Fryar was a very hard-working man and believed in having several jobs at one time. He was employed by IBM and after working for 30 years, he retired in 1991. He also worked for many years at Golden Belt, Liggett & Myers Tobacco Company, and Durham City School System. In addition to being employed, Deacon Fryar took pride in his entrepreneurship abilities as a lawn care professional, and a moving company owner. In addition, he was an avid fisherman and game hunter and took great joy in his catch! Deacon Fryar became a member of the Oak Grove Free United American Freewill Baptist Church nearly 60 years ago and previously served as the Chairman of the Deacon Board and was considered as the Senior Deacon, previous President of the Oak Male Chorus, a member of The Melody Chorus, the Senior Choir, and a faithful member of the Sunday School. He also served on the Senior Usher Board for many years. Deacon Fryar drove the church van picking up church members that needed assistance getting to and from church. He was a part of the Yoke Fellows Prison Ministry and enjoyed sharing the news of Jesus Christ to many incarcerated brothers. One of Deacon Fryar's greatest joys was singing and he didn't mind joining in with others to make harmony. He was well known for passionately leading the church in song, "Search Me Lord!" In his earlier years, he began his singing ministry as a young member of the quartet group, "The Heavenly Five." Additional musical participation includes the Henderson Grove Male Chorus and the 100 Men in Black Chorus. He was also a member of Dorcas Masonic Lodge No. 460 for many years. Later in his life he married Barbara Marable Jay and they were together for over 15 years. In this union, he received a stepdaughter, Jamette. Deacon Fryar loved his family, his church, and most of all, he loved the Lord! He believed in living and talking about the Word of God. One of his favorite scriptures was, "Be thou faithful unto death, and I will give you a crown of Life." ( Revelation 2:10b) He understood the importance of faith and consistent prayer where he lead his family faithfully in the home. Deacon Fryar was very proud of his family and considered each one of them as being special to him. His smile was one to capture everyone in the room, as he loved to laugh and "poke fun". He will be greatly missed, but we rejoice that he will now receive his crown of life. Deacon Fryar is preceded in death by his parents Rev. William & Beulah Fryar, four brothers, Ezekiel, Willie, Etha, and Nathaniel Fryar and one grandson, Timothy L. Fryar II. He leaves to cherish his precious memories his wife, Mrs. Barbara M. Fryar; daughters, Marsha F. Thompson (Ronnie) and H. Regina Gathers (Sheldon); step-daughter, Jamette Bruton; sons, Timothy L. Fryar (Khyalynn) and Dwight Peacock (Vickie); goddaughter, Janet Squires (Calvin); sister, Irene Fryar Best; brother, William Fryar, Jr.; two sisters-in-law, Rose Fryar and Joyce Fryar; eleven grandchildren; two great grandchildren; and a host of nieces, nephews, cousins, and other relatives and friends. A musical celebration to celebrate the life of Deacon Wilbert Fryar took place on Saturday, November 3, 2018, at Oak Grove Free Will Baptist Church, 801 Colfax Street, Durham, North Carolina, 27701, beginning at 5:00 p.m. Funeral services took place on Monday, November 5, 2018, at Oak Grove Free Will Baptist Church, 801 Colfax Street, Durham, North Carolina, 27701, beginning at 1:00 p.m., with a family visitation one hour prior to the service.

Deacon Wilbert Fryar, the son of the late Reverend William and Beulah Cox Fryar, was born September 2, 1933 and departed this life on Sunday, October 28, 2018 after a lengthy illness. He was the third sibling of six brothers and one sister. Deacon... View Obituary & Service Information

The family of Mr. Wilbert Fryar created this Life Tributes page to make it easy to share your memories.

Deacon Wilbert Fryar, the son of the late Reverend William and...

Send flowers to the Fryar family.