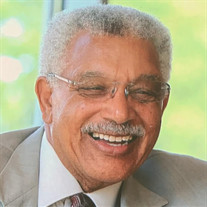 William Jerome Clapp, Sr., age 81, of Durham, North Carolina, went to his Heavenly home on Saturday, February 27, 2021. He was born on March 16, 1939 in Guilford County, North Carolina to the late Reverend William Clapp and Connie Zethel (Waddell) Clapp. He received his early education in the public schools of Greensboro and graduated from Dudley High School, Class of 1956. He met Doris Prince upon settling down in Chapel Hill, North Carolina in which they were married on June 17, 1976. Jerome was a man of many talents and worked jobs between North Carolina and New Jersey. After setting his sights on being a salesman, he started with Hormel but moved over to sell Jesse Jones Meats under Goodmark Foods until he retired in 1998. Jerome wa a faithful member of Mt. Zion Christian Church. He quickly became the man to lean on where he proudly served on the Pastor's Aide Committee, Finance Committee, Mass Choir, 100 Men of Faith, and anywhere he was needed. Although he loved serving at Mt. Zion, Jerome and Doris decided upon retirement, they would move to the mountains of North Carolina. Jerome and Doris became members of Cornerstone Summit Church in Boone, North Carolina in 2003. They mentored and prepared over 20 couples in the marriage mentor program. You could always find Jerome greeting members and guests with a smile as they would come through the doors of the church on Sunday mornings. He will be remembered for being a dedicated volunteer and servant leader in the Lord and as a prayer warrior for anyone in need especially family through the Clapp Family Prayer Group. Jerome loved working on the Clapp Reunions with his cousins and calling to check up on those whom he loved. Most importantly, he will be remembered for the love and devotion he had to "his bride" as he affectionately called Doris. Jerome leaves to cherish his memory, his wife, Doris Prince Clapp; three children, April Clapp Lee of Greensboro, North Carolina, William Jerome Clapp, Jr. of Birmingham, Alabama and Alicia Clapp Miller of Durham, North Carolina; nine grandchildren, Kathryn, Brittany, Randon, Allyx, Javon, Giovonnie, Jasmyn, Jayden, and Korey; uncles: Charles Clapp and Harold Clapp (Mary Lou) of Greensboro, North Carolina; aunts: Juanita Carter of Cheyne, Pennsylvania and Dorothy Townsend of Greensboro, North Carolina; a host of cousins, sisters-in-law, brothers-in-law, and other relatives and friends. A Celebration of Life for William will be held on Monday, March 8, 2021 at The River Church, 4900 Prospectus Drive, Durham, North Carolina 27713, at 1:00 p.m., with a viewing scheduled from 12:00 noon until 1:00 p.m. Interment will be in Beechwood Cemetery, 3300 Fayetteville Street, Durham, North Carolina 27707. In every effort to protect our families and their guests, face coverings are required.

The family of Mr. William Jerome Clapp, Sr. created this Life Tributes page to make it easy to share your memories.

Send flowers to the Clapp, family.