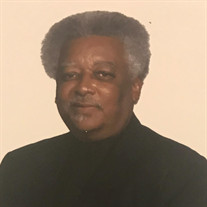 Condolences are being expressed to the family of Mr. William Colley, Jr., age 78, who passed away on Saturday, April 13, 2019, at Hock Family Pavilion, 4023 N Roxboro Street, Durham, N.C. 27704. William Colley, Jr., affectionately known as Junior, was the first son of Lois Hester Blaxton of Durham, North Carolina. He was educated in the Durham Public School system and a graduate of the Hillside High School Class of 1958. After graduation, he attended A&T State University and in 1963 left college to join the Air Force. In the military he traveled the world, volunteering for 3 tours in Vietnam and at other times living in places such as Greenland, Turkey and Greece. During his Vietnam service he was awarded the Vietnam Service Medal with two Bronze stars, the Air Force Presidential Citation, the Air Force Outstanding Unit Award with Three Oak Leaf Clusters and the Republic of Vietnam Gallantry Cross. In 1982, he retired and settled in Athens, Greece until he returned to the states in the late 1990's. Even though William lived most of his adult life in other parts of the world he eventually came back home to Durham, North Carolina. He worked part-time at Kroger, as a line cook at Hardee's and later as a driver for the Duke Durham Neighborhood Partnership. Throughout his life, William loved to play cards and his specialty was poker. He would not miss a poker game if he could help it. In his day he could also play a mean game of ping pong. He loved music and some of his favorite artists were the O'Jays, and the Platters. He had the largest collection of old movies, CD's and video tapes you had ever seen. His favorite channel was always the one that played old black and white movies, generally of the cowboy and kung fu genre. William was predeceased in death by his parents, his brother, Reginald Glen Blaxton, and his daughter, Johnetta (Peaches) Colley McLean. William is survived by his son, William Colley III, Ed.D, and daughter, Sharon Denise Colley; eight grandchildren, Lavon Chisley, Javon Chisley, ShaVon Mullen (Darnelle), Dominik Colley, Macajah Colley, Imani Colley, Skye Quinn-Colley and Pilahr Quinn-Colley; six great-grandchildren, MyKayla Chisley, Jordyn Chisley, Kamille Mullen, Kapree Mullen, Karmyn Mullen and Karter Mullen, close cousins, Mayme Webb Bledsoe, Gloria Hester, Larry Scott, Charles Graves, and James Calvin Nunn; one aunt, Marie Hester; a host of many other relatives and friends. A memorial service will take place on Monday, April 22, 2019, at First Calvary Baptist Church, 1311 Morehead Ave., Durham, North Carolina 27707, at 12:00 noon, with the family visitation half an hour prior to the service.

The family of Mr. William Colley Jr. created this Life Tributes page to make it easy to share your memories.

Condolences are being expressed to the family of Mr. William...

Send flowers to the Colley family.