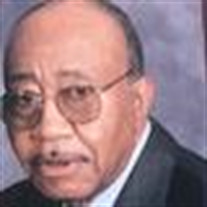 Condolences are being expressed to the family of Mr. Willie David McAllister, age 86, who passed away on Saturday, November 2, 2019. Willie David McAllister was born on December 1, 1932 in Scotland County, North Carolina to the late Hattie Gertrude McLean and John Willie McAllister. After the family moved to Durham, North Carolina, Willie was educated in the Durham Public Schools system, graduating from Hillside High School in 1951. He enlisted in the US Navy in June of 1951 and served eight years - four active and four reserve and received the Korean Service, National Defense Service and United Nations medals. While Willie was a very quiet man, if you wanted to get him talking just ask about his service in the Navy. He could talk for hours about his ship, the U.S.S. Rochester CA-124 and his travels around the world. He met Wilhelmina Thrower in New York, where they married on March 18, 1956. Durham, North Carolina became their home in 1957, where they raised a family of five girls. His girls remember his love for remote control cars, planes, classic car memorabilia and always seeing him shine his shoes. One of Willie's high school memories was Mr. Alston telling him, "that a fly would break his neck trying to land on his shiny shoes". In his Troy Street neighborhood, Mr. McAllister was known for his beautiful cars that he parked on the street on the weekends to wash and shine. He would also remind us as he cut, seeded and watered his lawn "to please stay off his grass". Willie bought his girls a German Shepherd. They affectionately named him "Sarge", since that was their daddy's nickname. He was also an artist in his own right. He painted, sketched and sculpted many abstract pieces that still decorate his home today. "Mr. Mac", as he was known by his co-workers, enjoyed employment at the Veteran's Administration Hospital for more than twenty years where he received numerous awards and recognitions; after retiring in 1987, he chose to return to the workforce and did security with Pinkerton and Securitas before leaving in 2009. Willie McAllister joined Peace Missionary Baptist Church in Durham, North Carolina, and became a member of the Gleaners where he worked faithfully until his health declined. While at home in the early morning hours of November 2, 2019, our loved one slept peacefully away as he answered his Master's call surrounded by his daughters. He was preceded in death by his daughter, Wanda Renee McAllister on February 28, 1962; his wife Wilhelmina Thrower McAllister on their 60th wedding anniversary on March 18, 2016; and his only brother Jesse Levirtus McAllister on September, 12, 2019. Willie leaves to cherish his memories his four daughters, Beverly McAllister Yancey and Brenda McAllister of Durham, North Carolina, Sharon McAllister Pickett (Devin Sr.) of Wilmington, North Carolina and Sherie McAllister of Cary, North Carolina; sisters-in-law: Ella Louise McAllister of Durham, North Carolina, Martha Kearney of Raleigh, North Carolina, Mary Thrower of Franklinton, North Carolina; brothers-in-law: Alfred Thrower, Jr. of New Jersey, Dexter Thrower (Brenda) of Wake Forest, North Carolina; nine grandchildren: Darnell Jr. (Shayla) and Danielle Yancey, Kayla McAllister, Tresor and Marius McAllister, Devin Jr., Daviava and Daveon Pickett and Khadija Grissett; four great grandchildren: Destiny and Damari Yancey and Jesslyn and Ryleigh Yancey; special daughter and son-in-law: Valencia "Lisa" and Jessie Swain, and a host of loving nieces, nephews, cousins and countless other relatives and friends. A celebration of Willie's life will be held at Peace Missionary Baptist Church, 2608 NC Highway 55, Durham, North Carolina 27713 on Thursday, November 7th; Family Visitation at 12:00 noon and Life Celebration Service at 1:00 p.m., with Rev. William E. Daye delivering the eulogy. Mr. Willie David McAllister will be laid to rest in Beechwood Cemetery. The family will receive guests at the home of daughter Brenda McAllister, 500 Larchwood Drive, Durham, North Carolina 27713.

The family of Mr. Willie David McAllister created this Life Tributes page to make it easy to share your memories.

Condolences are being expressed to the family of Mr. Willie David...

Send flowers to the McAllister family.