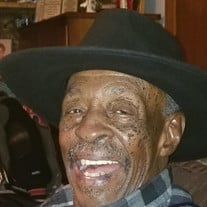 Condolences are being expressed to the family of Mr. Willie Parrish, age 84, who passed away on Sunday, February 3, 2019, at Hock Family Pavilion, 4023 N Roxboro Street, Durham, N.C. 27704. Willie was born in Durham County, North Carolina on July 31, 1934, to the late Willie and Maggie Parrish. He was preceded in death by three brothers and two sisters. Willie was a man of few words, but left a lasting impression on all who met him. Willie was educated in the Durham Public School System at Little River in Bahama, North Carolina. He was most skilled at providing for his family and community through harvesting fresh fruits and vegetables and maintaining livestock. Willie was also highly skilled at auto body repair and a jack of all trades around the house. Willie was a strong believer in working hard to obtain the better things in life and committed 20 years of service to University Ford of Durham. After retirement, Willie was later employed by Lowes Home Improvement of Durham, where he worked until his health no longer allowed at the age of 84. Willie, along with his wife, raised their children in a Christian home. He was a member of New Red Mountain Missionary Baptist Church of Rougemont, North Carolina. He also attended Mount Calvary Baptist Church of Bahama, North Carolina with his wife on a more regular basis. Willie was a silent worshiper and maintained an internal relationship with the Lord. Surviving relatives include his loving wife of 61 years, Ruby S. Parrish; one daughter, Catherine Green (Charles); two sons, Willie Parrish, Jr. (Constance) and Eddie Parrish (Cicely); seven grandchildren, Lakisha Pettiford (Terrell), Anthony Burton, Myesha Burton, Jeremy Tinnen, Jermaine Tinnen, (Nicole), Ashley Jennette and Jasmine Parrish (Janna); fourteen great grandchildren; one sister, Gertrude Parrish; one brother, Joe Parrish; two sisters-in-law; one brother-in-law; and a host of other relatives and friends. Funeral services will take place on Saturday, February 9, 2019, at New Red Mountain Missionary Baptist Church, 1401 Red Mountain Road, Rougemont, N.C. 27572 at 2:00 p.m., with a family visitation half an hour prior to the service.

Condolences are being expressed to the family of Mr. Willie Parrish, age 84, who passed away on Sunday, February 3, 2019, at Hock Family Pavilion, 4023 N Roxboro Street, Durham, N.C. 27704. Willie was born in Durham County, North Carolina on... View Obituary & Service Information

The family of Mr. Willie Doffis Parrish created this Life Tributes page to make it easy to share your memories.

Condolences are being expressed to the family of Mr. Willie Parrish,...

Send flowers to the Parrish family.