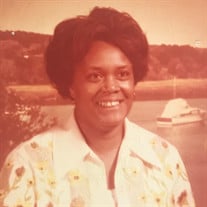 The family of Zora L. Torain, age 88, announces her passing which occurred on Tuesday, March 19, 2019, at Hock Family Pavilion, 4023 N Roxboro Street, Durham, N.C. 27704. “When I have come to the end of the road and the sun has set me free, I want no rites in gloom, but joy. Why cry for a soul set free.” Zora Lunsford Jones Torain, daughter of the late Annie Lunsford Myers was born February 7, 1931 in Durham County. She entered into eternal life on March 19, 2019. Zora graduated from Little River High School in June, 1949. After graduation, she attended the National School of Business in Nashville, Tennessee. Zora moved back to North Carolina and was employed by Duke Hospital for 18 years. While at Duke Hospital, she was offered and accepted employment at UNC Hospital in Chapel Hill, NC. For a period of several years, she was employed full-time by both hospitals. She retired from UNC Hospital in Chapel Hill, NC after 27 years of employment. Zora was married to the late James L. Shelton. To this union, one daughter, Esther Marie Ann Shelton was born. She was subsequently married to the late Harold Jones. To this union, one son, Clifford Delano Jones was born. Zora met and went on to join Jasper C. Torain in Holy matrimony. They were married for twenty-eight years until his death in 2002. Zora was a dedicated and committed member and deacon of New Red Mountain Baptist Church. She served in the Pastor’s Aid and the Missionary Circle Ministries and was an Advisor to the Announcers and to The Sunday School. Zora was affiliated with and represented her church through participation in numerous activities and related organizations. Included in these organizations is the East Cedar Grove Missionary Baptist Association of NC, Inc., where she held positions of leadership in the Congress of Christian Education and was a participating member of the Woman’s Auxiliary and the Ministers, Deacons and Deaconesses Union. Zora was also a member of the St. Anita Maria Chapter #622 Order of the Eastern Star Prince Hall Affiliate, where she served in positions of leadership. She was one of the key persons involved in establishing the charter for the Rougemont Chapter of the Order of the Eastern Stars Prince Hall Affiliate. Additionally, she was a member of the Sisters of Color, AKA, Red Hatters of Rougemont, N.C. She is survived by her two children, Esther M. Shelton of Chapel Hill, NC and Clifford D. Jones of Rougemont, NC., three grandchildren, Jannavush Garrett, Anjanek Nicholson and Clifford Delano Jones, II; six great grandchildren; four sisters, Josephine Pridgen, Marjorie Jones, Zellie Mae Reams, Zelma Faye Reams; and four brothers, Eddie Reams, Luther Reams, Phillip Reams and Robert Reams; and a host of nieces, nephews, cousins and extended family and friends. Funeral services will take place on Tuesday, March 26, 2019, at New Red Mountain Missionary Baptist Church, 1401 Red Mountain Road, Rougemont, N.C. 27572, at 2:00 p.m., with a family visitation one hour prior to the service.

The family of Mrs. Zora Lunsford Torain created this Life Tributes page to make it easy to share your memories.

The family of Zora L. Torain, age 88, announces her passing which...

Send flowers to the Torain family.